Pinheads no hacks when it comes to Brier souvenirs

For serious collectors, swapping Brier badges takes on a social life of its own.

Some people collect stamps. Others collect coins. And curlers? They collect pins. Lots and lots of pins. Take Dave Phillips. He says he has “just a small collection.” Small? Phillips has 9,301 curling pins. And counting. 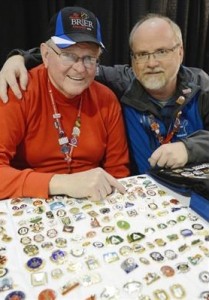 “I’ve picked up 50 to 60 new pins this week,” said Phillips, who lives in Red Deer. But Phillips still trails some of the bigger ‘pinheads,’ as they call themselves.

“Keith Forbes from Hartney, Manitoba, has between 18 and 19 thousand pins. And there’s a guy from Calgary, Curly Waltz, who must have 25,000 of them,” said Phillips, seated at his trading table at Rexall Place. “So comparatively, mine really is a small collection.”

With the pins coming in all sorts of shapes and colours and measuring the size of quarters to loonies, the bigger collectors have their pins framed. Smaller collectors wear them on their jackets or coats.

Or, like Edmonton’s Ron Whitney, they wear them on their sweaters. Walking around the concourse between Friday’s Tim Hortons Brier curling draws, Whitney owns about 300 pins and he was wearing all of them.

“I’ve been collecting pins for the last 20 years,” said Whitney. “What can I say? I got hooked on it.”

Why the fascination? “For me, it’s a hobby,” said Phillips. “And it keeps my memory active.  I’m at it every day checking on eBay and emailing people from across Canada. It’s also a social thing. You meet so many people trading and collecting pins.”

This year’s Brier pins sold for $6.99 while club pins are going between $3 and $5. But, just like with coins and stamps, some curling pins are rare and the sky is the limit.

The story goes that only 12 pins were made from the first Brier in 1927. The members of the winning Nova Scotia team each got a pin and those four pins are on display at the Halifax Curling Club. But the whereabouts of the others is unknown. 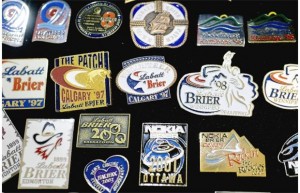 An assortment of old Brier pins from the collection of Barry Taman … for sale or trade in Edmonton.

“I’ve got all but two of the Brier pins from 1940 on,” he said. “I’m missing the 1954 Edmonton Brier pin which had white on it, and I’m missing the 1951 Halifax Brier pin that had a bird on it. I’ve been looking everywhere for them. My chances of finding them are scarce.”

Regina’s Barry Taman, who works for Laurie Artiss Ltd (The Pin People) which makes many of the pins, said that the most popular pins this week are the official logo pin of this year’s Brier and the three-piece puzzle pin in the shape of a maple leaf.

“They both sold very quickly,” said Taman, adding that the history of curling-pin collecting goes back a long way.

“Pins are such a big part of the culture of the curling environment. It goes back to the old days when all the curling clubs had pins, and when you went out to shake hands, curlers would exchange pins.

“The Scottish clubs used to do that a lot,” said Taman. “It’s more of a European thing, but it has really caught on here. Pin collecting now is a big part of the culture of the curling environment. It’s become ingrained. If you look around, it seems like just about everyone is wearing pins.”